If আপনি could change anything about book 1 of Legend of Korra, what would it be?

Personally, I don't really like how they handled Amon's death. It feels quite rushed and undermines Amon's character.

My changes would be in the ending of the book.

I think they should of made it; when Amon was in the water spout, he finally snaps. Instead of throwing himself into the sea and trying to escape, in my version, he would gather up water and blast himself towards Korra, দ্বারা this point, he just doesn't care anymore, all he wants is revenge.

Mako tries to defend Korra but both of them are quickly subdued দ্বারা Amon's bloodbending. However police sirens can be soon heard in the far distance, distracting Amon. Korra grabs her chance, spending an endless stream of wind against a Amon, pinning him against the far wall. Then Mako moves in, shooting a আগুন ball right into Amon...

The camera cuts to landscape shot of the Pro-bending arena, with a scream agony fills the air. The people below on the street, shocked and speechless. Back in the corridor, Mako backs up, Amon falls to the floor. Korra and Mako become silent. Amon struggles to get up, half of his face and part of his shoulder horribly burnt, for real this time.

Metal benders swamp the building, quickly apprehending the now scared Amon. While in custody, this is when it's revealed দ্বারা Amon, that the story of him; living on a farm and his whole family being killed দ্বারা a firebender, weren't complete lies after all. Well, most of it.

As when Amon ran away, he had been adopted দ্বারা the farmers. And, like in the story, they were soon killed দ্বারা the Firebender. However the only thing that turned out to be a lie, was the firebender attacking Amon. The truth was, Amon had killed the Firebender with his bloodbending.

Put what you'd like to see changed, down in the comments! 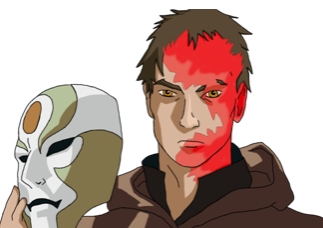