Hi all, here is a picture of my Ferret, Frank. He escaped this morning and killed my daughter's rabbit as আপনি can see. Have any of আপনি had any similar experiences with ferrets attacking other animals? Poor Hayley is heartbroken. 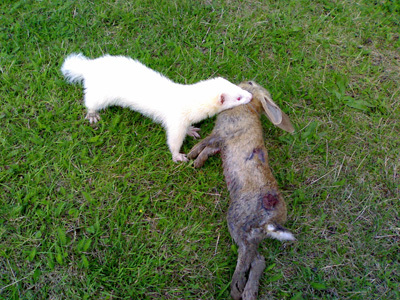 Thanks for the info, unfortunately I was unable to check up on ferrets before getting Frank, he belonged to my late Father who only passed recently and had nowhere left to go so we took him in with us. As far as I know, Frank had never shown any aggressive nature towards any other living thing when my father had him, he was always handled regularly and as my father had nobody else at home, he spoke to Frank as if he was another person. Granted, Frank does not get the same level of attention from us as he did from my Father but surely this would not be a reason for this sudden change in behaviour? We have tried to keep things as normal as possible for Frank since the loss of our father and my wife has ব্যক্ত that Frank must be able to sense that I was my father's son as Frank seems to prefer my company most of all in his new home, she says it is almost like he has made a brotherly bond. I have my doubts about this and I think the only reason he is closer to me than anyone else is due to the fact that after he গাউন one of my steroid supplements and seemed to enjoy them, I use them as a treat when he has behaved well. Do আপনি think I am maybe spoiling him দ্বারা giving him treats? Everyone else in the family gave আরো attention/affection to the rabbit so do আপনি think it was maybe a jealousy thing?
crashnjd posted বছরখানেক আগে
posted ·10 মাস আগে