বছরখানেক আগে LoveforSeverus said…
I know! I've wanted to go to Auburn since I was 5. If they get a Quidditch team by then... uh, yeah! I have a Beater's build I think... even though I'm a girl

But I've always wanted to be a chaser

বছরখানেক আগে venvargie said…
Haha, idk what I would be fit to do on a Quidditch team. xD

বছরখানেক আগে LoveforSeverus said…
I'm checking out the rules but I'd make a fair chaser.

বছরখানেক আগে emlincr said…
^^Haha sam here! I want to go to Berkeley and they already have a Quidditch team =D Yay! Lol I play basketball so I figure I would be a good chaser.

বছরখানেক আগে LoveforSeverus said…
I know, I should probably go to Georgia and they have a Quidditch team but if Auburn gets one and I have to play against Auburn! I couldn't do that! I'd throw the game. No joke.

বছরখানেক আগে emlincr said…
I think Quidditch would be really fun to play but i don't know about it being like an actual league and all you know. Even as a hardcore HP fan, I think that's a little extreme and nerdy. Ah! Don't hate me guys!

বছরখানেক আগে LoveforSeverus said…
If you're from America, what college do you like?

I like cheese. that's the best one there is :D

LMAO!!!!! (this is someone's opinion on the twilight movie):
[Edward drags her by the arm through the woods, like, what, you couldn’t get a good enough grip on her hair or something? Damn. Then he zooms her up the mountain on a forcible piggyback ride and storms off into a single spotlight sunbeam in an epic snit over what a monster he is, he must SHOW HER the HORROR OF HIS BEING, a TERRIBLE SECRET accompanied by the SOFT FLUTTERING OF WINDCHIMES:]
EDWARD: I AM VAMPIRE. HEAR ME TWINKLE.

BELLA: Oh, wow, I spent like $60 at Sephora trying to get sparkle like that. What is that, Urban Decay?

EDWARD: THIS IS THE SKIN OF A KILLER, BELLA!

BELLA: FINE. WHATEVER. But the lipstick, that’s gotta be Cargo, right?

বছরখানেক আগে lucius_malloy said…
Riight... You know, I never did understand the point of that scene. But that would about sum it up.

বছরখানেক আগে EyesPOP said…
Twilghts just a book that uses long words to make it look like good writing like "Bella woke up to see Edward looking at her, she felt Supercalifragilelisticexpialidotios as she looked at him smiling he fell out the window" HA

moo - what the hell is yours?

My icon is the moon from The Mighty Boosh

^Mine is Severus Snape

My icon is Neku from The World Ends with You. (It's a video game for the ds) Really good game, y'all should play it.

বছরখানেক আগে SuperFab15 said…
Can I just say that I HAVE to go to a college with a quidditch team!!!!!!

বছরখানেক আগে souflizzle317 said…
I'M BACK!!!!! I'm actually really impressed, you guys only added 6 pages and I was gone 4 whole days...anyway, that's still a lot and so I'm gonna catch up on everything:

@whoever it was who said, I'll Make A Man Out Of You is an epic song :) It's the official song of my French class, my friends and I are always singing it when we're doing random things in class haha :)

@Fred, Rupert Grint is so awesome for having that ice cream truck!!! I found about it a few years ago, and it's really epic :)

@moo: "Oh you know just beat Voldermort when I was 11. Then his memory when I was 12. Saved my godfather when I was 13. Competed in a Triwizard Cup when I was 14 then watched my sort of friend die and witnessed the rebirth of the Dark Lord but made it out alive. Oh when I was 15 I fought Voldermort again and found out that I have a destiny and that I had to kill Voldermort if the Wizarding World were to find peace. When I was 16, I had to deal with that info and school and find Horcruxs in order to kill Voldermort and had to watch my mentor die at the hands of my enemy. 17 was a rough year too. I couldn’t return to school, Voldermort took over the Wizarding World, I chased down Horcruxs with my best friends, almost lost one, found the place where my parents died protecting me, then I broke into a bank, stole a dragon, flew to Hogwarts and lead my friends into battle against the forces of evil, losing some of them at the hands of evil wizards, then sacrificed myself so the war could end and give my friends a chance. Turns out I managed to kill the part of Voldermort in me then killed him and saved the entire world. And that was all in just a span of 7 years.

Hey Edward Cullen, you’ve been around forever. What the fuck have you done besides whine and bitch and moan?"

@LoveforSev, you asked about colleges, so HARVARD!!! my aunt, grandfather, great-uncle, and 2 cousins have gone there and it's been my dream since I was about five :)

I'm not even sure what my icon is right now because I haven't been on here so long but I'm about to change it to a picture of Carl, the awesome llama from the youtube video Llamas with Hats :)

EDIT: sorry this is so long *looks sheepish* I had to catch up on a lot of stuff :)

723 There's no Snape in Twilight

724 Harry Potter is fun to read and watch. Twilight was...boring.

"I'm about to change it to a picture of Carl, the awesome llama from the youtube video Llamas with Hats :)"

বছরখানেক আগে souflizzle317 said…
@ven, not sure you have, but i love you too haha :) (I hope that doesn't sound too creeperish...) I found llamas with hats the other day with my friend because we were looking at related videos to Charlie the Unicorn and I die of laughter every single time I watch either llama video tehe :) "CARRRRRRL!"

বছরখানেক আগে souflizzle317 said…
@ven, hahahahahaha have you seen the second one?
"Carl, why is the lifeboat all red and sticky?"
"Well, I guess you could say it *is* red and sticky"
"Carl, what are we standing in?"
"Would you believe it's strawberry milkshake?"
"No I would not believe that"
"Melted gumdrops?"
"No..."
"Boat nectar"
"No"
"Some of God's tears"
"Tell me the truth Carl!"
"Fine, it's the lovely elderly couple from 2B"
"Carrrrrl!"

XD
Me and my friend laughed so hard at that part!

বছরখানেক আগে souflizzle317 said…
@ven, I haven't seen it for a while, but isn't the Elder Swear the one that takes Dumbledore like a full minute to say or something? It's pretty epic :)

বছরখানেক আগে venvargie said…
but isn't the Elder Swear the one that takes Dumbledore like a full minute to say or something? It's pretty epic :)

It is.
Omg I wish I remembered it by heart.

lol, at my school there's this guy named karl, and every time we see him, my friends and I all yell out "KARRRRRRRRL!!! WHY WOULD YOU DO THAT?!?!?!" and he always looks at us like we're insane. It's funny :D

বছরখানেক আগে souflizzle317 said…
Carl is freaking awesome :) I downloaded both llamas with hats videos to my itunes and my ipod and I get hysterical with laughter every time I watch them :)

OMG FANGIRL BINGO!!!!!
(everytime a fangirl attacks you, cross off the arguments they use! XD) 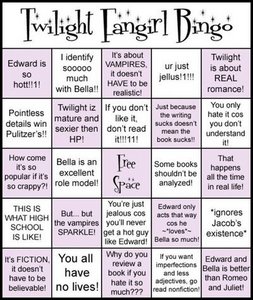 বছরখানেক আগে souflizzle317 said…
*raises hand* um, bingo? I think I've already won...Let's see, "Edward is so hot!!!!1!" "Twilight iz mature and sexier then HP" "Free space" "Edward only acts that way cos he loves Bella so much!" and "Edward and Bella is better than Romeo and Juliet!"

Yeah I love Llamas with Hats too!! I have a shirt that says CAAAAAARRRLLLLL! and a picture of him. LOL

lol I know the best way to get bingo. go on the 1000 reasons why twilight is better and say you don't like it, or you want to see more reasons. then you'll get bingo!

^Actually you won't. HP fans have sort of taken over.
Previous
Something to say? Sign in with one of these options:
Log in to Fanpop! Not yet registered? Create a new Fanpop account!