বছরখানেক আগে frosttakahashi said…
Alan: I'm a weapon yea, but a witches weapon...*he looked to the side ashamed*

বছরখানেক আগে TheAdventGhost said…
Jiro: Why are you looking ashamed?

বছরখানেক আগে musicxgirl18 said…
Amuria: -nods- I agree with Jiro!
Eric: If your nice then your witch meister must be nice too. By the way, where is your meister?

বছরখানেক আগে TheAdventGhost said…
Jiro: Good question, but yeah. Maybe her being a witch might not be so much a bad thing.

বছরখানেক আগে musicxgirl18 said…
Eric: Yeah as long as she doesn't meet you know who.
Amuria: Yeah, if she knew a witch was near by, it would be bad.

বছরখানেক আগে musicxgirl18 said…
Amuria: Huh? Didn't you say you met her?
Eric: The meister of Daisy Rivers, that creepy annoying girl who gave you your fortune?
Amuria: Rose Yuuki! She has some history with witches so....
Eric: If she knew one was near by.....
Amuria: Let's just say it would be...bad
Eric: VERY bad

বছরখানেক আগে TheAdventGhost said…
Jiro: I remember Rose Yuuki, but she didn't tell me this history

বছরখানেক আগে musicxgirl18 said…
Amuria: I bet she didn't. She doesn't like talking about it.
Eric: I can't blame her. I would feel the same way if anything happen to you
Amuria: Yeah....She hasn't been the same since that day...

বছরখানেক আগে musicxgirl18 said…
Amuria: Since a witch killed her boyfriend in front of her
Eric: Who was also Amuria's older brother
Amuria: ......

বছরখানেক আগে musicxgirl18 said…
Amuria: -closed her eyes- Yeah it happen and I can never forget that day either.....
Eric: Me and Amuria weren't there when it happen. Her brother and rose were on a date and on their way back, a witch came and attacked them. Rose didn't have Daisy and her brother didn't have his weapon. They were defenseless but they still fought. Until....
Amuria: Until the witch killed him and made sure she watched. She watched as he died a slow and painful death...-a tear rolled down her cheek-

বছরখানেক আগে musicxgirl18 said…
Eric: -wiped away her tear- The witch was going to kill Rose as well but something stopped her. Some meisters with weapons saw and fought her off. The witch got away sadly and hasn't been seen since.
Amuria: Rose use to be filled with so much joy, so much laughter. She had the best laugh I ever heard. But ever since my brother died, she has not laughed once. She'll give you a small smile but its not the same as before...

বছরখানেক আগে TheAdventGhost said…
Jiro: Where would this witch be now?

বছরখানেক আগে musicxgirl18 said…
Eric: -shakes his head- No clue
Amuria: But Rose said she will never forget what she looked like.
Eric: Red eyes...
Amuria: Long black hair
Eric: Evil grin
Amuria: With an evil laugh
Eric: Not even Daisy is able to predict when they will meet again

বছরখানেক আগে TheAdventGhost said…
Jiro: Does anyone know when the next Witch Council meeting is?
Soma: Jiro. don't tell me. You plan on busting in and taking her down.

বছরখানেক আগে musicxgirl18 said…
Amuria: -gasps- You do?!
Eric: That's great! That means we can crash in there and beat up that evil witch!
Amuria: Yes but....where is it?

বছরখানেক আগে TheAdventGhost said…
Jiro: I know where it is, I once went there for a mission,

বছরখানেক আগে frosttakahashi said…
Alan: You're not gonna hurt anyone are you....?

বছরখানেক আগে musicxgirl18 said…
Eric: Just that one witch
Amuria: We should tell Rose about this.
Eric: What! Are you crazy?! We bring her along, she'll go on a killing spree!
Amuria: I know but it won't feel right to go there without her.
Eric: It will be a blood bath if she comes. She won't be stable once she hears all this!
Amuria: I agree but she said, she was going to be the one to kill the witch and no one else.
Eric: -sighs- That's crazy. Jiro, what do you think? Should we really tell Rose?

বছরখানেক আগে TheAdventGhost said…
Jiro: We only need one witch. We don't need lots of casualties, We're doing this ourselves

বছরখানেক আগে musicxgirl18 said…
Eric: -smirks- Its better this way.
Amuria: It doesn't feel right! We should tell her!
Eric: She'll lose it!
Amuria: No she won't! Please Jiro! Let me tell her. She swore upon my brother's grave that she will be the one to kill her.

বছরখানেক আগে TheAdventGhost said…
Jiro: I'm sorry, but if she comes, she'll lose it, then she'll take this mission way further than it needs to be.

বছরখানেক আগে musicxgirl18 said…
Amuria: -turned away and closed her eyes-
Eric: -hugs her- I know you want to do this for her but think about it. It's only been a year since then. Do you really think she will be able to control herself? Do you think DAISY could control her?
Amuria: -sighs- Fine, we don't tell her

বছরখানেক আগে frosttakahashi said…
Alan: I could keep her under control. I can seal her soul wavelength until we find this bad witch.

বছরখানেক আগে musicxgirl18 said…
Amuria: You wouldn't know! You haven't seen her go berserk!
Eric: Be lucky that you haven't
Amuria. Hush!
Eric: ....
Amuria: If she gets upset and angry when she hears we defeated the witch, she will go berserk either way.

বছরখানেক আগে TheAdventGhost said…
Jiro: You can?! That would be perfect, if we can keep her under control, we could have an opportunity

বছরখানেক আগে frosttakahashi said…
Alan: *transforms into tiny wolf cub* Just have her carry me and i can do it.

বছরখানেক আগে musicxgirl18 said…
Amuria: -smiles- Alright! I'll call her now! -she takes out her phone and calls rose-
Eric: Man, do I hope you can keep her under control dude

Anything else you want us to know: Bio: At the age of 5, Ren was forced to watch the death of his parents at the hands of enemy soldiers, which were
Kishins. After they were done with the adults, they attempted to kill Ren by shooting him in the chest and throat,
but he amazingly survived. When he tried to call for help, nothing came out of his mouth, because his Voicebox had
a stray bullet stuck in it. It's impossible to take out without killing Ren first. Once he found his old home again,
Ren gathered what he needed and fled to Death City. 2 years later, Ren found Rin and Len Kagamine, twins that are
also weapons. Seeing that he needed help, they decided to stay with him as protection. At the age of 12, Ren and
his partners came across a camp filled with soldiers, which were the same ones that killed his parents. Filled with
rage at the soldiers and the insanity that plagues his mind, Ren lost control of himself and killed all of the
soldiers in the camp, including the innocent ones. Once he was finished, he lit the camp ablaze and continued to
Death City. 3 years later, he reached his destination and settled into an apartment. When Ren could finally relax,
he heard word of the "Death Weapon Meister Academy" or "DWMA". Ren became interested, so he applied for it and he
is now currently a student there. His Soul Resonance is "Fear Garden". Much like Crona's "Screaming Resonance",
Ren uses his soul wave-length to make his weapons reverberate and do damage to the Meister's soul and weapon, but
there's one difference. When "Fear Garden" is activated, Ren can also use sound waves through his weapons, like
amplifiers, to deal damage to the enemy. His eyes also change from Blue to Orange when this is active. This is also
the only time he can actually "Talk",because Ren uses whatever is left of his Voicebox to do extreme damage. His
fighting style depends what music is playing on his MP3. (Rock = Critical blows, Pop = Fast attacks, etc.) Ren has
become friends with Crona, Ragnarok, Kid, Liz, Patty, BlackStar, Tsubaki, Maka, and Soul. Even though he has a
crush on Maka, he can't tell her how he feels, because his Voicebox is broken. He communicates with his friends by
sending his thoughts to one of his weapons and Rin or Len repeats it to the others.

Anything else you want us to know:Rin is the twin of Len, but they aren't blood related. She found Ren Kagamine wounded in the middle of a field,
so Rin and her brother agreed to help him get to Death City. That event happened about 9 years ago, when they were
only 7 years old. Now they are students at the DWMA, with Ren as their Meister. Rin is the kind of person that can
get along with anyone and help them as well. She is very kind and goes with what the team decides. Even though Len
is her twin, Rin has a crush on him. (Shut up, they're not blood related!) No matter what situation she's in, Rin
is always positive. No one knows why the number "02" is on her shoulder.

Anything else you want us to know: Len is the twin of Rin, but they're not blood related. When Len found Ren Kagamine in a field 9 years ago, he
helped him get to Death City with his sister. Len usually thinks about what he should decide on, like what to do
and where to go. He is also one of the smartest students in the DWMA, just below Maka. Even though Rin is his twin,
he has a crush on her. (Shut up, they're not blood related!) No matter what situation he's in, Len always has a
plan ready. No one knows why the number "02" is on his right shoulder.

বছরখানেক আগে frosttakahashi said…
(i know why they have the 2 tattoo xD, but cool vocaloids cross-over :D)

বছরখানেক আগে frosttakahashi said…
are these the outfits len and rin are in? 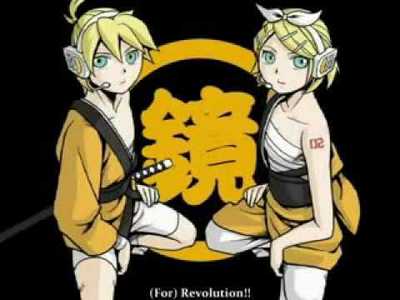 বছরখানেক আগে Animated_Heart said…
Rose: -walks towards town- We still haven't found them yet
Daisy: Don't worry. I predict we will meet them soon.
Rose: -sighs- Ok
Previous
Something to say? Sign in with one of these options:
Log in to Fanpop! Not yet registered? Create a new Fanpop account!