1
Mairu Orihara পরিলেখ
posted by mitsuki963
Mairu Orihara (折原 舞流, Orihara Mairu) is one of Izaya's younger sisters. She has a twin named Kururi. Like her brother, she's a troublemaker at school and introduces herself as liking to read encyclopedias, manga, and adult magazines. She also declares that she is bisexual and is looking for girls who are interested. This causes a stir in the class and she is bullied briefly until she responds to one of the bullies দ্বারা threatening her with thumbtacks as well as taking her to the bathroom and stealing her bra. Later, the sisters are assumed to have framed the bullies for having drugs by...
continue reading...
2
Durarara: Trust me lyrics
posted by Alchemistlover
Original / Romaji Lyrics    English Translation
I'm here, soba ni iru kara
Call me, boku ga iru kara
Trust me, mou nani mo osorenaide
My dear, mienai ito de
Trust me, tsunagatte iru kara
Tada kanjite ite, kono nukumori

I'm here, I'm right পরবর্তি to you,
call me, since I'm right here,
trust me, don't fear anything anymore.
My dear, with the invisible threads of fate,
trust me, we are connected দ্বারা them,
so simply stay and feel my warmth.

Chanto kikoete iru, kimi no kokoro no koe
Chiisana fuan sae boku ga tsumitotte ageru
Nando mo tsutaetai, kimi wa hitori ja nai
Kawaru koto no...
continue reading...
1
Celty Sturluson পরিলেখ
posted by mitsuki963
Celty Sturluson (セルティ ストゥルルソン, Seruti Sutoruruson), also known as "The Black Rider" অথবা "The Headless Rider", is a Dullahan from Ireland who came to জাপান looking for her stolen head. Her motorcycle is actually a horse in disguise, which she has named Shooter. She has no head and perceives via unknown sensors that are not located on the head. The physical strength she possesses is above human, though not quite on par with Shizuo Heiwajima and Simon Brezhnev. She is also capable of manipulating a shadow-like, durable substance to form objects ranging from gloves to chariots...
continue reading...
2
Anri Sonohara পরিলেখ
posted by mitsuki963
Anri Sonohara (園原 杏里, Sonohara Anri) is a bespectacled girl who attends the same school as Mikado and Masaomi. She is rather quiet and timid, but appears very close towards Masaomi and Mikado. Although possessing a tendency to seclude herself from others, she is intelligent, clever and resourceful. Her full figure and shy behavior gives her the unwanted attention of many males (though she doesn't do anything about them). Her online chat screen name is "Saika".

Characteristics
Apperrance-wise, Anri is known for her short, bob-cut hair, glasses and her rather large breasts. She is usually...
continue reading...
2
Shizuo Heiwajima পরিলেখ
posted by mitsuki963
Shizuo Heiwajima (平和島 静雄, Heiwajima Shizuo) is renowned as the strongest man in Ikebukuro. He currently works as Tom Tanaka's bodyguard, and he is shown to be familiar with some of the major characters in the series, such as Izaya Orihara and Celty Sturluson. He was a member of the Dollars group. Shizuo is voiced দ্বারা Daisuke Ono in the original Japanese anime, and দ্বারা Crispin Freeman in the English dub of Durarara!!.

Shizuo is a often seen wearing his trademark bartender suit and blue sunglasses. As a child he had brown hair, and later dyes his hair blonde as Tom suggested...
continue reading...
2
Izaya Orihara পরিলেখ
posted by mitsuki963
Izaya Orihara (折原 臨也, Orihara Izaya ) is a powerful and skilled underground informant. He usually gives information for his own enjoyment, and claims to প্রণয় the entire human race, excluding Shizuo Heiwajima. Izaya likes to start fights with him, as seen in episode 25, and then let Shizuo chase him around. He is voiced দ্বারা Hiroshi Kamiya (Japanese) and Johnny Yong Bosch (English).

Izaya has the appearance and expression of one who is extremely crafty and confident. He is repeatedly described as a handsome man with a beautiful face দ্বারা other characters in the novels. He claims...
continue reading...
4
Rubbish. Don't like it, don't read it (Main Topic: Kida Masaomi)
posted by Saijou_Himitsu 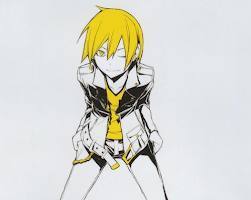 *Hey, shakin' it baby now! (*From Kida's 'Linda Linda!!') Hi, everyone! This is Saijou Himitsu! Do আপনি know the one who recently পোষ্ট হয়েছে some ডুরারারা অনুরাগী arts including Kida Masaomi and Mikado Ryuugamine, Yagami003? He's my best friend! And since I'm so happy right now, I guess I better transform myself into Kida.
----------------
Introduction
----------------
Actually, the main topic for today is 'How to be the One and Only Kida Masaomi'. Yes, that's right. *Kida Masaomi, Kida Masaomi, Kida Masaomi that means, it'll be ME! But-then-a-gain...(*From Kida's 'Linda Linda!!'), আপনি need to know some...
continue reading...
1
Masaomi Kida পরিলেখ
posted by mitsuki963
Masaomi Kida (紀田正臣, Kida Masaomi) is a resident of Ikebukuro and Mikado Ryūgamine's best friend from childhood. He was the one who encouraged Mikado to come to Ikebukuro. He is enthusiastic about picking-up girls, but seems to be a failure at it. He was depressed and lonely before Mikado arrived because his girlfriend was kidnapped and injured during a gang war between the Blue Squares and Yellow Scarves, which he led at the time. After Anri is injured during the Slasher incidents and the rising presence of the Dollars, he is forced to become the leader of the Yellow Scarves once more....
continue reading...
3
Mikado Ryugamine পরিলেখ
posted by mitsuki963
Mikado Ryūgamine (竜ヶ峰帝人, Ryūgamine Mikado) is a childhood friend of Masaomi Kida and the primary male protagonist of the series. He is later revealed to be the creator of the Dollars

Characteristics
Mikado is a polite, soft spoken boy, whom at times can be quite childish and naive. This is likely a result of his small town upbringing; as he moves to Ikebukuro he was amazed and overwhelmed দ্বারা the sheer size and energy of the city, and thus himself felt small and insignificant. He was bored of the average life he previously led, and moved to Tokyo in খুঁজুন of adventure. To he himself,...
continue reading...
10
ডুরারারা [info]
posted by Gwiazdeczka 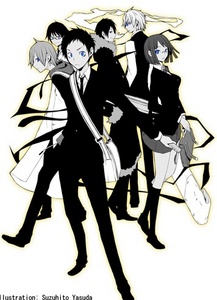 Alternative title: Dhurarara!!, Dyurarara!!, Dulalala!!, Dullalala!!, DRRR!!
Genres: action, romance, supernatural
Plot Summary: Ryuugamine Mikado is a boy who longs for the exciting life of the big city. At the invitation of his childhood friend Masaomi, he transfers to a school in Ikebukuro. Masaomi has warned him about people he doesn't want to ক্রুশ in the city: a champion fighter, an informant, and a mysterious gang called "Darazu." Nervous from Masaomi's stories, Mikado witnesses an urban legend on his first দিন in the city, the Headless Rider astride a black motorcycle. From then on, the existence of অতিপ্রাকৃতিক cases and a gang called the Yellow Turbans will rise to the surface, and Ikebukuro will pushed to the breaking point.

Kadota Kyohei
4
Shinra Kishitani পরিলেখ
posted by mitsuki963
Shinra Kishitani (岸谷 新羅, Kishitani Shinra) is a young underground doctor who lives with Celty Sturluson. He stays mostly indoors and wears a white কোট even when not working as a doctor. He went to the same primary school as Shizuo and has since then been interested in his unlimited strength in times of anger. In fact, he rather enjoys when Shizuo makes use of his strength. His father was a doctor and, since childhood, he has participated in surgeries with his father, the most notable a vivisection on Celty. He went to the same middle school as Izaya and has been বন্ধু with him since...
continue reading...
More Cards
1234567891011